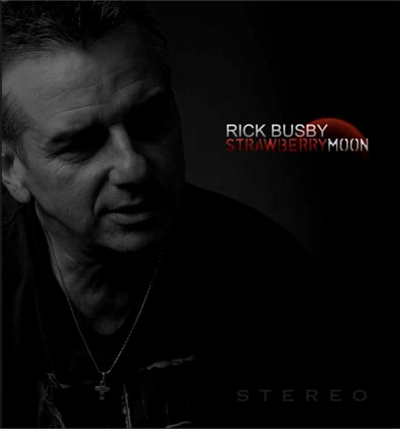 Strawberry Moon is the second release by Austin-based songwriter and recording artist Rick Busby. His sophomore effort marks a musical departure from his debut, Soul Diving. Where Soul Diving offered a diverse menu of his pop and rock influences, Strawberry Moon delves more into his country rock leanings. However, in its own way, Strawberry Moon is just as musically and thematically adventurous as the debut.

Connecting the two musically disparate projects is Busby’s spiritually searching lyricism, which explores themes of identity, place and purpose in a world of constantly shifting relationships. However, unlike Soul Diving, which was completely self-written, on Strawberry Moon, he includes four songs written by others, along with six originals. Among those originals is the title track,  a meditation on fathers and sons, unrealized dreams and forgiveness, which was co-written with frequent collaborator, Lenny Cochrun.

Produced by Stephen Doster in Austin, Strawberry Moon features ten tracks, chosen from about 25 songs considered for the record. Recorded in late 2011 at EAR Studio in Austin with Moonlight Towers frontman, James Stevens on the boards, Strawberry Moon was initially released in September 2012.

Lyrically, the songs on Strawberry Moon largely depict the journey of a soul through a single lifetime. In the case of “Old Soul,” the swampy and gritty blues Bob Cheevers penned cover, that journey could extend even through eternity. The characters that populate the songs on Strawberry Moon are restless and constantly searching for home in a world where there are no easy answers.

These characters are endlessly roaming the world, weary, exhausted and sometimes crazed, yet constantly trying to get at a deep truth, something real that will help make sense of it all. Everyday, these characters are at a crossroads and must choose the path they will follow. Yet, somehow through all the bad choices, restless journeying and battered bodies and souls, they persevere to seek a higher truth, a deeper sense of purpose, and possess an innate desire to be lifted up.